Here we have a classic Brown Bess Musket c.1800 with a swan neck cock. It has a beautiful original wood finish with all brass components with a nice luster and patina. The lock has a nice dark finish with the GR and Tower marks clearly stamped, and the barrel with a pleasant brown finish and decent bore. Inspector marks are on the barrel and on the butt. The lock works well, nice and tight. The swivels and original ram rod present. An overall good example of this classic firearm of the Napoleonic wars and the War of 1812.

Offered is a good example of a Sergeants 1839 Pattern percussion musket with the short lived Lovell's Catch for the bayonet. These are not common. The Musket is dated 1846 and were used in the colonial wars of the period. This example is well marked with Tower, date, inspector marks and stamps in the wood. The barrel is a pleasant patina and is clear and well maintained. The wood has a lovely finish with only minor dents and scratches. The mechanism works well and the proper bayonet is included. 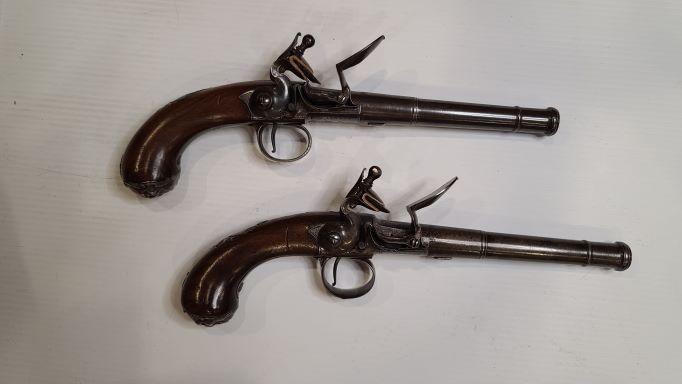 A matched pair of pistols made for the North Royal Exchange. Near mint condition, with clean barrels, well marked by the maker and inspectors. The wood is for the most part clean and in fine condition, with small dents in the grip on each pistol. The fittings are silver and very attractive' reflecting the quality of the firearms and the station of its owner. The detailing includes floral filigree and grotesque masks on the grip pommels. These are highly sought after by Revolutionary War collectors, especially in this condition. A beautiful matched set. 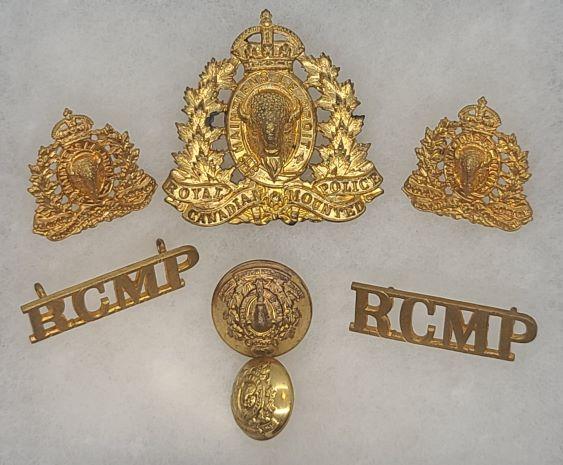 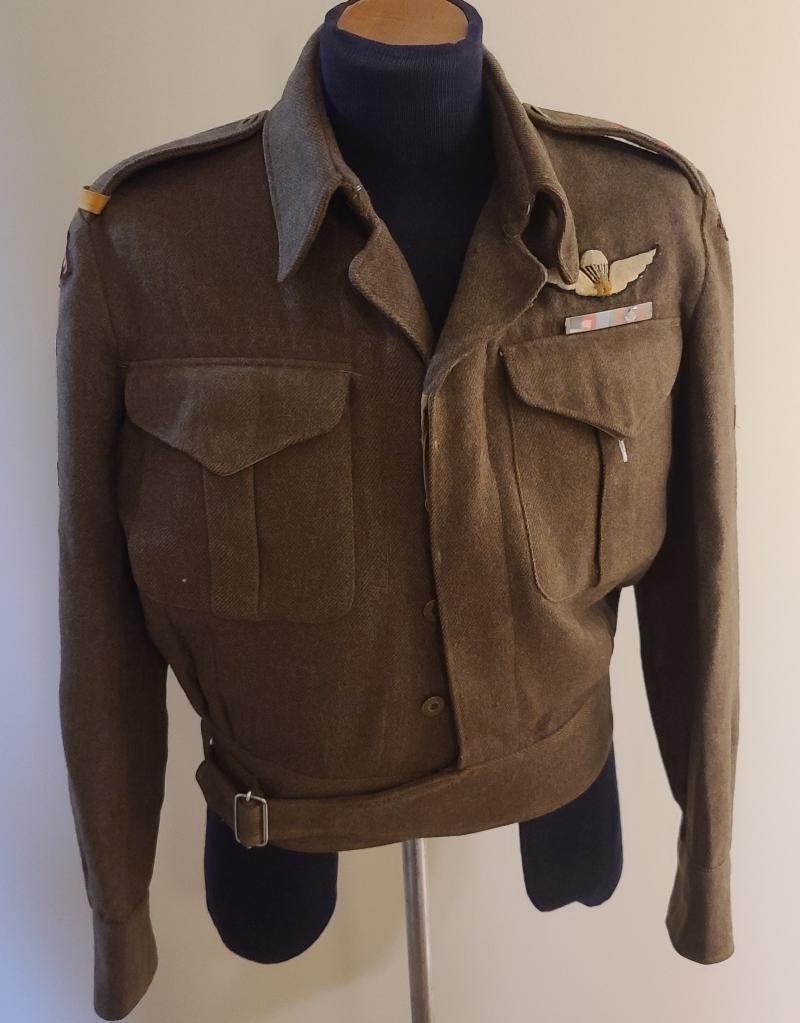 An original BD tunic from a member of the Bn with documents. Only has one yellow Battalion tab. Great condition, canvas patches. 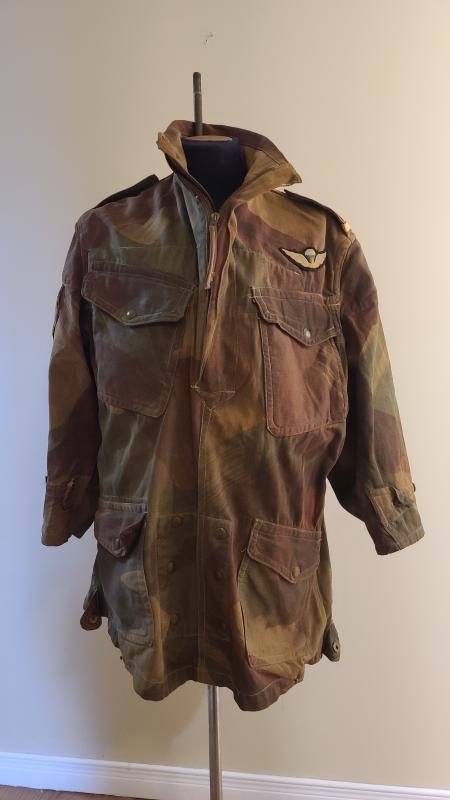 A classic Denison smock issued to a Canadian sergeant in the 1st Para Bn with Canadian jump wings and yellow slip-on tabs dated 1944. Good condition overall, it does not have the elastic cuffs of earlier models, the type used on D-Day. A great example.

Offered here a chance to own an original deactivated Canadian 2" Mortar that has seen a lot of service. Introduced in 1938, these tubes were a close quarter, quick fire device that could give a Platoon some integral indirect fire. Every Canadian Platoon had one with its HQ Section during WWII. It could fire High Explosive, Smoke and illumination rounds and had a rate of fire of 8 rounds / minute. These were also used during the Korean War and did not go out of service until the late 1950s, early 60s. The modern equivalent would be the M203 Grenade Launcher on the C7. This example has the simplified base plate with the tube and base assembly as per the standard Mark 8* model. It is marked, but the paint has obscured the stamps. It reads 2" Mortar 8* over the date that appears to be 1943 over the serial number. There is what appears to be an Ohio manufacturer stamp on the tube near the base. The trigger assembly is intact with its original pull string. There is a steel bar welded to block the opening of the tube and a 1" hole has been drilled into the tube to compromise the use of the tube at the base to make the weapon Inoperable. The sight is missing, with only the white line present on the tube to line the weapon with its target. The muzzle cap and the proper short sling are present with hooks. No Dewat munitions included. A very cool addition to a WWII Canadian collection that rounds off how a basic Infantry platoon was armed. * CANDIAN CUSTOMERS ONLY. 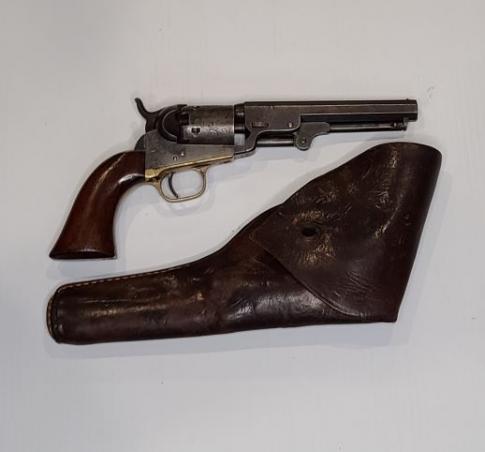 Here we have a nice clean Colt Pocket with its brown leather holster. Its 5" octagonal barrel is in good condition with crisp rifling and a clear address marking. The silvered brass strap has about 45% of its original finish and the wood grips are in good condition with original stain, but a slight dent on the left side. The serial numbers are matching, the wedge is unknown. The action is tight and crisp. The overall finish is about 75% with a nice patina and the cylinder image is very clearly defined, better than most. The holster fits like a glove and is soft and pliable, with its original stud closure. Part of the seam has come unstitched on the side, but otherwise in great shape. A nice set for a classic Colt pistol. This is an antique percussion hand gun and does not require a PAL. 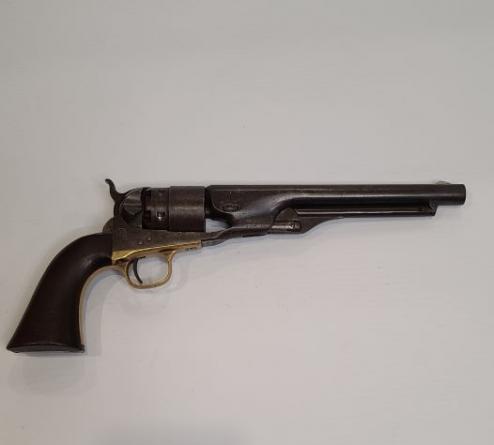 Offered here is an original 1860 Colt Model Army issued to US Cavalry and other troops. Martially marked it rates a 2 on the Antique quality scale. It is .44 Cal with a 3 screw frame, brass trigger guard with inspector marks on the frame and cartouche on both the right and left side of the grip. A nice overall patina, functional mechanism and reasonable good 8" barrel. The original finish is mostly gone from the barrel, with some blueing left on the frame. Steel strap with original wood grips in good condition, the left side having a noticeable surface scratch. Matching serial numbers and readable address on the barrel. A nice solid representative antique pistol from the Civil War. A staple for those collectors interested in that conflict. This is an antique percussion hand gun and does not require a PAL.