Flight helmet Type C with Mk VII goggles. Both in good condition, the goggle elastic band is stretched, but still does the job for display. The helmet has typical wear. A great set for any display. 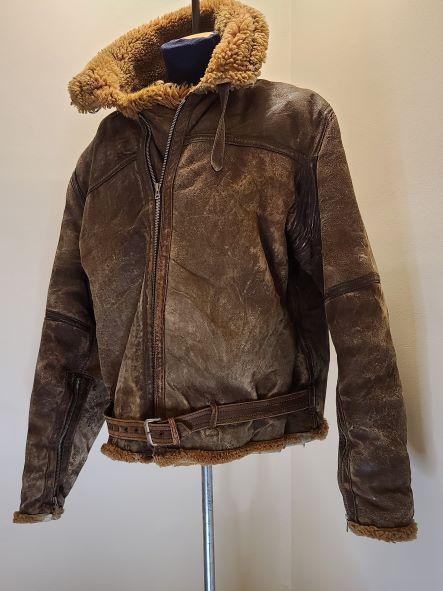 The classic Bomber crew over suit for high altitude bombing over Germany. This outfit includes the jacket, pants and boots. The set is rough, well worn and need of some minor repair. There is a tear in the back of the jacket and the pants knee has also suffered repairs. The leather is chaffed and there are parts missing. The zipper takes some work to get going and the fur is still in place. The winter boots are also worn, the zippers work and they watch the overall look of the suit. If you want to display an affordable rough and rugged Bomber crew display, this will fit the bill. These jackets are hard to find these days and in mint condition fetch $1K on their own. 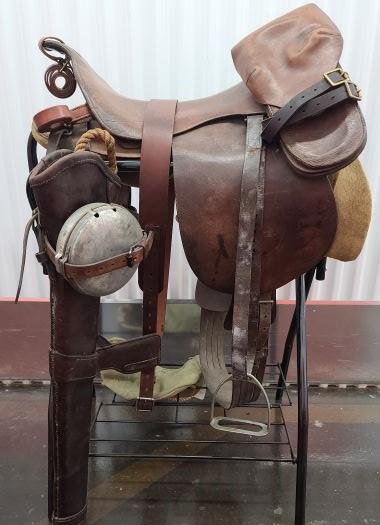 Offered here is the standard saddle used by Canadian Cavalry Troops from 1902 to 1940. This particular saddle dates from WWI and has all of its parts and add on components to include: Saddle with felts in good condition overall Girth and cinch Wallets Horseshoe wallet and sword straps Rifle boot Mess tins Various straps Water bucket Peg Rope Stirrups and straps The pads are in good condition, but the right rear has a bite size chunk out of the bottom. The leather is supple and in good condition, but the stirrup straps are dry and cracked. The attachments are all together and complete. A few straps are authentic reproductions. A sound example for display or reenactment. Stand included. 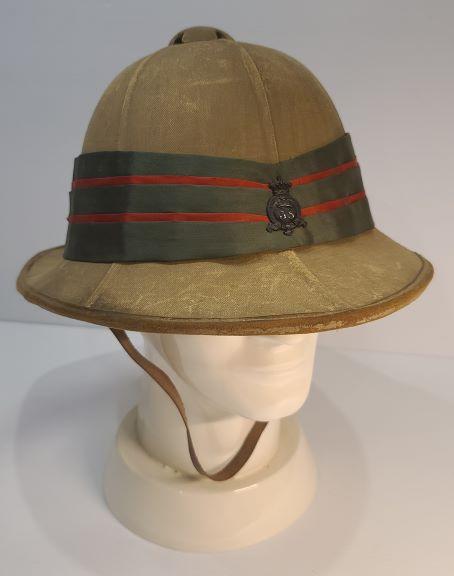 Here we offer an excellent example of a Wolseley helmet worn by the CO of the 38th Rifles dating to about 1939. The helmet has a unique regimental pugaree approved in 1937 with a small cap badge center to the front of the cork helmet, approved in 1939. The Pugaree was supposed to be white, but the CO convinced HQs to accept the regimental colour version. The helmet has the CO's name in pencil on the inside lining and a regimental stamp to the 38th. The condition of the helmet overall is very good, with normal wear, and includes a chin strap and storage bag. The liner and fitting band are classic construction and in good condition. There is a faint maker and size mark as well on the interior. These sun helmets were typically worn on militia summer camps and exercises for decades since their introduction in 1911. This unit was not mobilized for overseas service during World War II, but they did do service here in Canada as a recruiting and home front unit. The CO name requires more research. 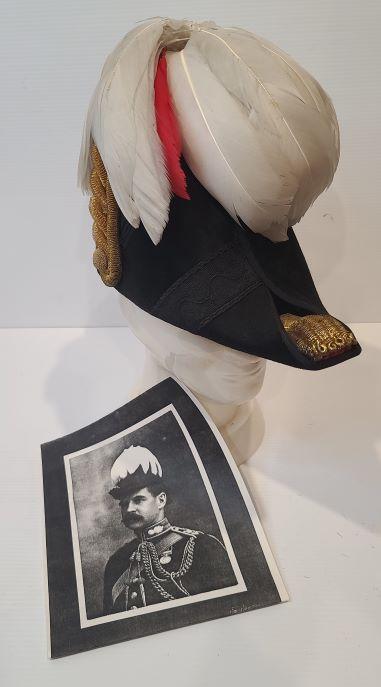 Here we offer some of the belongings of MGen Robert William Rutherford who was the Commander of the 6th Canadian Division during the first World War and a regular force Artillery Captain during the Northwest Rebellion. He was also a noted artist with several well known works depicting military historical events that are note worthy. MGen RW Rutherford was born Aug 21, 1857 and attended the Royal Military School in Halifax, graduating in 1877. He was an Officer in the Canadian Regular Permanent Militia 1877 to 1885 stationed in Halfax, Kingston and Ottawa. He was in Col Otter's Column during the 1885 Rebellion. He was a Capt in "B" Battery Royal Canadian Artillery on this campaign. He was Mentioned in Dispatches for distinguished service at Cut Knife Hill and in Operations against Chief Big Bears' band. He was later promoted Major in 1896, LCol in 1905 and Col in 1907. He was Commandant of the Royal School of Artillery from No 15 1907 to Mar 31, 1908 and then appointed Master General of Ordnance and Colonial Militia Staff in Apr 1908. He was later appointed Commanding Officer of the 6th Divisional Area in 1913 and promoted Major General Dec 23, 1914 until his retirement Mar 31, 1916. He died Jan 5, 1933 at 75 and is buried in Cataraqui Cemetery. Included in the collection are a girth of documents, both official and personal correspondence, military documentation, original art work and scrap books, his General's insignia and his bicorn. Although the tin reads Colonel Rutherford, the bicorn, in mint condition, was modified with General rank braid. The General rank feathers are in good condition and come with their tin as well, but the stem is short making mounting a little difficult, but doable. Unfortunately his medals are not included, There is a photocopy of his picture included. He was most famous for his painting called "the Surrender of Poundmaker", painted in 1887, shown here, but not included. 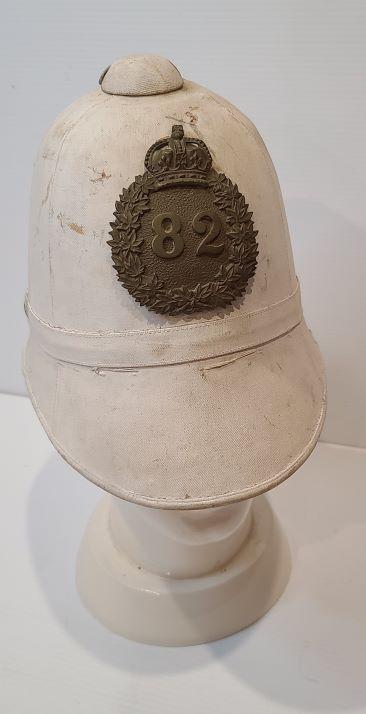 Here is a nice example of a period 1898 dated 4 panel helmet in white blanko with a helmet plate to the 82nd Canadian Militia Bn. This is a hand-me-down from the British Army, originally marked to the Royal Artillery, rebadged and marked WD 1898. The embossed rosettes and brass chin scale are missing, but the proper vented cap sits on the crown of the helmet as for field wear. Condition wise the lining and the liner show a lot of honest wear, all original to the helmet. The body shows lots of use with the white blanko finish flaked off in numerous locations, there is some damage to the front crown cork inner body showing a bit of distortion in the shape at the front of the crown vent cap. Probably dropped on its crown once too often, but does not take away from the overall shape. These period helmets fetch ridiculous money in the UK, here is one to fill a void in a collection at a reasonable price. If you want a Boer War dated Helmet this is it. If you have a South Africa issue Khaki helmet cover, put it on without the badge and you have the perfect dated example. 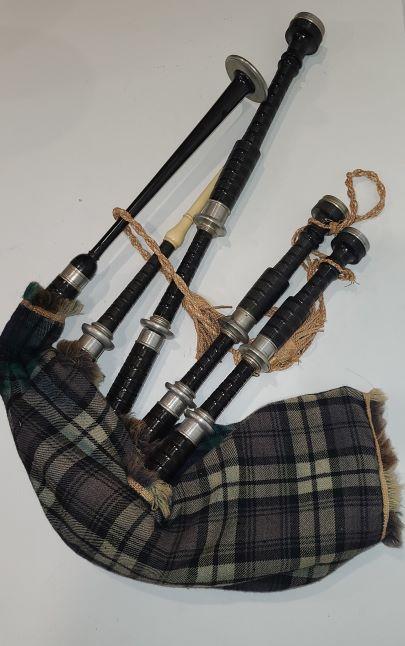 Here we offer Bag Pipes to a Highland Regiment, possibly the Royal Highlanders of Canada or the Argyle and Sutherland Highlanders of Canada. Not possible to date these, but likely 1945 onward. Great for display, the bag is dried out and stiff, but this helps them stand up in a showcase. The pipes are all present and have not been tested. There are spare parts and a canter included. No box. 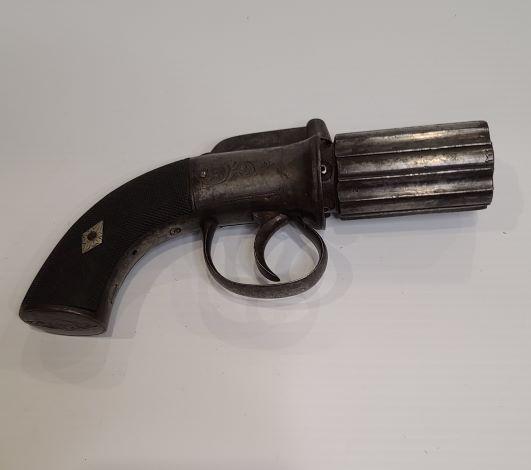 With the advent of the percussion system firearm a trend began amongst manufacturers to figure a way to fire more than one shot at a time. Most firearms of the age were single shot systems well into the 1850s that required skill and time to reload for every shot taken. Much experimentation went into the idea of a multi barrel system. The "Pepper Shaker" pistol is one such invention that actually became marketable and saw distribution in Europe and North America. It is believed that this example is made in England. This system would be modified many times until the cumbersome design was converted into the more practical and efficient cylinder system that survived to this day. For all intense and purposes this model was a stepping stone to the final design. Offered here is a standard version of the Pepper Shaker hand gun with its all steel construction and rotating barrel cylinder. The cylinder would rotate on the pull of the trigger making it double action. There is a nice aged patina to the finish and some very limited filigree on the body. The hardwood grip is checkered, dark in tone and tight to the frame in good condition. The large trigger guard is somewhat large and clumsy looking, but would be useful with gloves. The trigger and double action is tight and functional. The barrel rotates properly and the hammer strikes each nipple without deviation. A nice antique hand gun for display purposes showing one of the significant changes in hand gun design. This is an antique percussion hand gun and does not require a PAL. 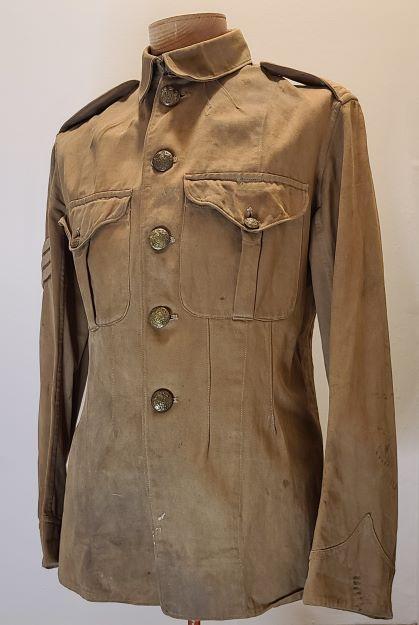 Offered is the standard post South African War tunic for the British forces that remained in service well into the first world war. This tunic was used in the colonies i.e. India and Africa prior to the war, and in places like Persia and Iraq, Saudi Arabia and other temperate locations during the war. It has the general service buttons, sergeant stripes and all of the correct features to the pattern, including first aid dressing pocket. There is some fraying on the back collar, soiling and stains from use on operations. A solid example that is WD marked and illustrated in Clive Laws book "Scarlet to Khaki" (Pg 179).

A magnificent original Life Guard Officer Helmet with silver washed helmet shell and gilt insignia and fittings. The shell has silver plate that has tarnished over time but none has worn away, just requires a light careful cleaning to bring its luster back. All of the fittings and the Helmet plate badge are gilt, retaining about 95+% overall. The correct velvet lined large officer's chin scales are in fine condition and the original officer's helmet liner is in overall good condition, with a bit of the silk puling away from the leather for 5 or 6 inches. The plume is the early correct long white horse hair plume with large rosette fitting atop the post. The enamel on the helmet plate central garter star is 100% and is a stunning example of these fine helmets. If you want the most elaborate Dragoon helmet for the 1880s - 90s to add to your headgear collection this is one of the best examples you can find. untampered with and in brilliant shape.