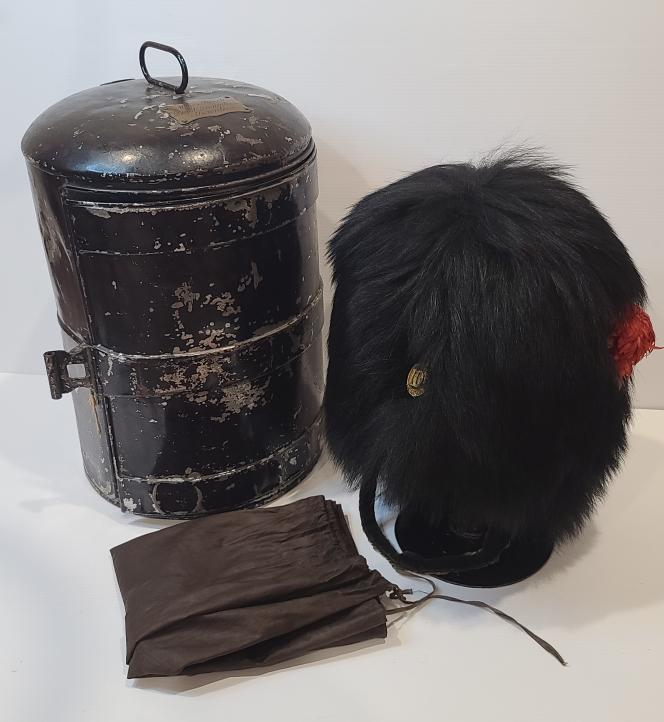 Offered here is a Victorian era busby or bear skin to the 10th RG with its original cloth storage bag and a tin marked to an officer of the regiment for the purposes of storage. Originally ORs and NCOs wore the fusilier style busby with the grenade device, until replaced in 1895 with the Guards bear skin. What makes this an NCO style is the male fur busby measuring 9.5" at the front with a high quality grenade badge and the short 5" red over white feather plume with a gilt base. Other ranks wore male fur, with plane brass badges and stiff two tone hair plumes red over white. Officers wore a taller female bear fur 11" busby with a much longer 10" version of this red over white plume and a gilt badge and chin scales. OR fur was stored in cloth bags, where as the officers were stored in tin cylindrical storage boxes. The regiment was eventually authorized to wear the complete Grenadier Guards style of uniform before 1912. The Victorian bear skins were lined with leather to give form, around 1900 the regulations changed and the later versions were framed internally with wicker to give more form, lighter weight, more air circulation and allowed for cheaper production. The regiment stopped wearing the grenade once given permission to wear the Grenadier Guard's dress, adopting their regulations. The grenade badges were restricted to wear on the white cork helmet. This particular example of the 10th RG busby offered here is leather lined and therefore early. It has the correct brass chin scales. The japanned tin is in nice shape with its internal tin stand, named to a Major who served in the unit in the late 1890s. This tin is only included to store and preserve this bear skin. It is no clear the two items came together, they may have been mismatched as these things often do in regimental QM before it was taken out of commission.

We offer here a rare opportunity to own a famous Baker Rifle issued to the 95th Foot. In April 1801 the 95th Rifle Regiment received their baptism of fire on board Nelson’s Squadron off Copenhagen. This rifle was used by this famous regiment in the Peninsular Wars, North America and at the Battle of Waterloo. This particular Musket belongs to the 1st Bn and therefore was not at New Orleans. This is an early variant c.1801, well marked on the lock plate Tower, GR crown, inspector marks on the barrel, and unit marks to the 95th on the brass butt plate, marks on the bayonet as well. The two compartment box in the stock is typical of the early models and the bayonet fits the lug on the barrel like a glove. The rare Baker bayonet is without scabbard, but it is in fine original condition. The stock is in fine condition with a nice dark finish. The barrel and all metal parts are in good condition, with rifling still in good shape and a lovely surface patina, the brass fittings with honest wear. The lock is in excellent condition, tight and in working order. A rare and beautiful example, perfect for the Napoleonic collector or British Arms Collector, that wants it all. 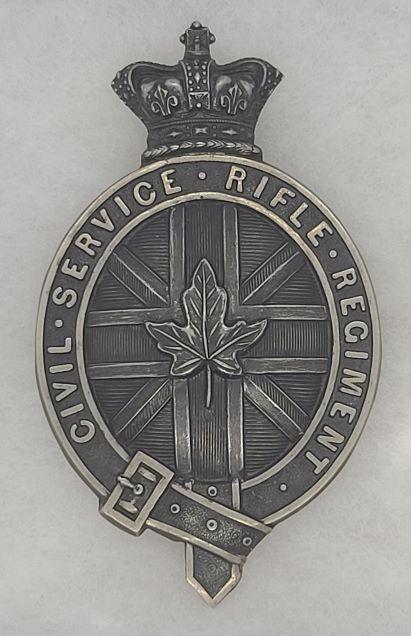 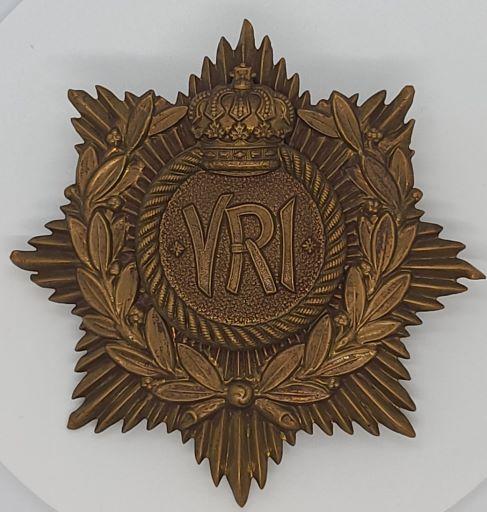 Offered here is a fabulous Prosser Presentation Sword with stunning craftmanship of the highest order. The blade is in the 1796 style with a 1788 form to the hilt. There is traces of gilt finish (25%) over the elaborate copper fittings framing the leather scabbard. Much of the gilt finish is worn off some areas of the scabbard, but 95% remains on the brass hilt. The blade is 31" of fine steel and is inscribed with a gilt wash (60%) with the following: "THE GIFT OF THE ATTORNEY'S CAVALRY TO CAPTAIN JAMES SHANLEY AS A MARK OF THEIR GRATITUDE FOR HIS SERVICES." The Militia unit was located in London and consisted of lawyers, judges and other court appointees in the ranks. A wealthy unit that rewarded those who served in its ranks with expensive lavish gifts. Prosser was well known for high quality sword smithing, and this is one of his best. 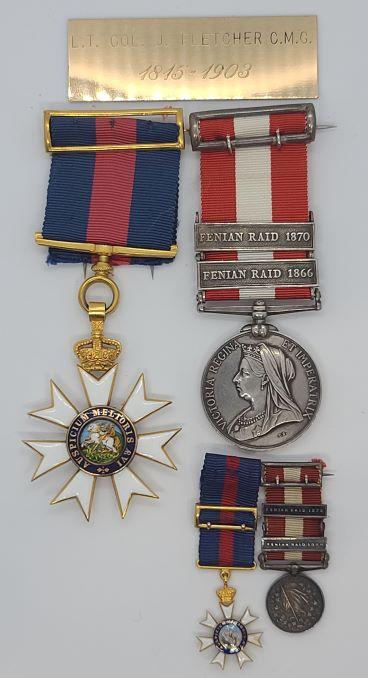 Offered here is a rare medal group to LCol John Fletcher who served as District Staff Officer in the Fenian raids in District 8, Montreal. He played a primary role in the planning and execution of operations at Trout river in 1870 Fenian Raids, that resulted in the repulsing of Fenian incursion into Canada. He had served previously in the 1866 Fenian Raids as a Junior Officer as well earning him a two bar Canadian General Service Medal. For his excellent work during the 1870 operations he was recognized with the CMG, probably one of only a few issued to a Canadian for this conflict. The group includes the CMG, CGS and miniatures of both. A name plate for framing comes with the set. 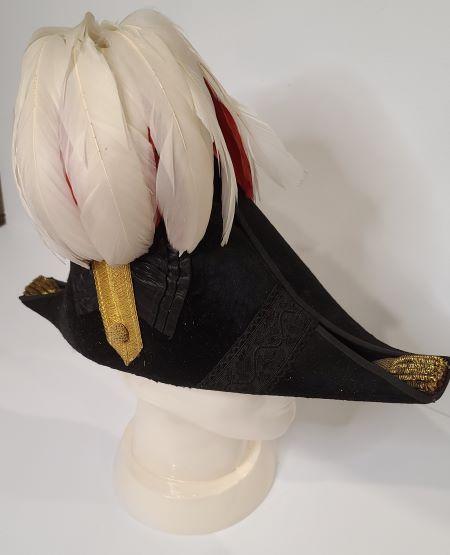 Commissioner Cortlandt Starnes was born in Montreal, Quebec on March 31, 1864 and was educated at Plateau Academy, a commercial institution in the same city. By the mid-1880s he held a position in a customs brokers company. His real love however was soldiering. He attended Infantry School in St. Jean, Quebec and in 1884 was awarded a 1st class certificate. In 1885, when the Rebellion broke out, Starnes accompanied the 65th Mount Royal Rifles Regiment westward as an Adjutant. When the conflict was over, Starnes was awarded the North-West Rebellion Medal and Bar and was appointed Inspector of the North-West Mounted Police. Starnes' career in the Force was long and varied, serving on the prairies, in the Yukon, Quebec, Manitoba and Ottawa. On April 1, 1923, he became the 7th Commissioner of the Force, the first of French Canadian ancestry. His period as head of the Force was one of expansion of duties, particularly with respect to enforcement of federal statutes, increased mechanization with radio, telephone and the motor car, as well as growing technical services in ballistics, forensic science, photography and fingerprinting. Two noteworthy accomplishments carried out by Starnes were the resumption of provincial police responsibilities in Saskatchewan in 1928 and the creation of the Anti-Narcotic and Drug Distribution Branch in the Force. Starnes retired on August 1, 1931 having served over forty-five years. He died at St. Hilaire, Quebec on May 28, 1934 and is buried in Cote des Neiges Cemetery, Montreal. Here we offer the 7h Commissioner's Full Dress Cocked Hat Headdress with its feather cockade and tins. The headgear style can be found in J.J. Boulton's reference books on uniforms and headgear of the RCMP (page 192 of Uniforms of the Canadian Mounted Police). The cap first appeared in regulations in 1909 in describing the full dress blues, a uniform meant for wear on parades, ceremonial occasions and high profile events. It was first described in the 1923 regulations in detail and was removed from dress regulations in 1965 as an obsolete form of headgear. These caps were issued to senior officers and by the 1930s were only worn by the Commissioner and Deputy Commissioner. Starnes was Commissioner in 1932 and would have require this item of dress for his duties. One can tell by the condition of the cap offered here that they were worn infrequently, still a cap unique to the office of the commissioner. The Japanned tins provided with the set are designed to protect these ornate and fragile headgear from damage and soiling in transit and shipping, one for the cap itself and the cylinder tin for the feather cockade. The tin has a large brass plaque that is etched with the owners name and unit. It reads "Commissioner C. Starnes R.C.M.Police". The bicorn body and white silk lining is in excellent condition with the brocade bullion wire tips in brilliant finish and sound condition. The gilt lace tape running down the right side of the the cap finished with a bullion wire button is meant to show rank and is in brilliant condition without tarnish or wear. The feather red and white plume fits the cap with a unique wire framed post maintaining its original form, the feathers showing very minor wear. The two components fit their respective tins perfectly. A unique opportunity to own a unique piece of RCMP history named to an important member of the force. We also offer Starnes' Commission Scroll as an Inspector under documents code #50218. 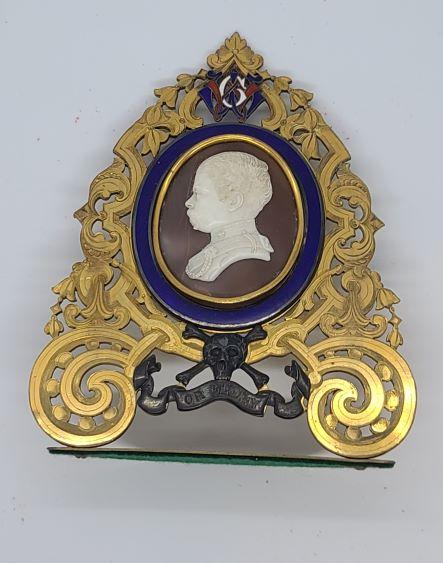 17th Lancer Memorial or Death Plaque for a fallen

A beautifully made decorative relief silhouette intricate image on a gilt stand of an Officer of the 17th Lancers who may have been killed in battle, possibly a member of the light brigade. Unfortunately there is no paper work or name associated with this object to prove this assumption. 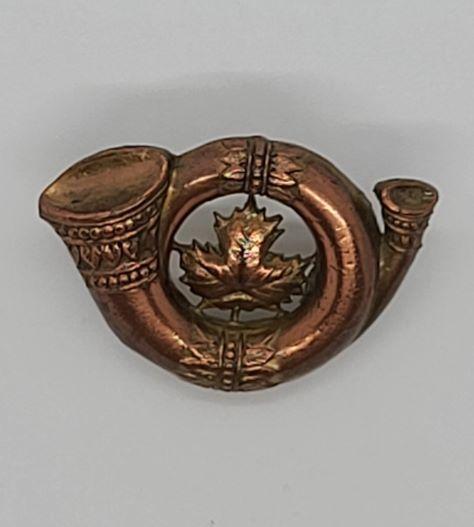 The 260th Battalion was mobilized and organized in September 1918, under commanding officer Lieutenant-Colonel F.C. Jamieson. Official authorization for the unit came on 1 November 1918, as the '260th Battalion, Canadian Rifles, CEF (Siberia)'. The unit was authorized both by General Order 128 (1 November 1918) and by CEF Routine Order 1084, dated 20 September 1918. The unit embarked at Victoria aboard S.S. Protesilaus on 26 December 1918, and sailed to Vladivostok where it disembarked on 15 January 1919. The unit served with the 16th Infantry Brigade as part of the Allied Forces in eastern Russia until 9 May 1919, when it returned to Canada. The unit officially disbanded on 15 November 1920. Very rare badge, in good overall condition with its original lugs and comes with two variants of pin back collars.

Offered here is an original British Army 1856 Pioneer Sword worn by Infantry Pioneers. This was a weapon and tool in one. It is not a bayonet, but a sword hanger worn by other ranks with the role of pioneer in an Infantry Battalion. The saw back was considered a proper tool for cutting, but such a tool could cause horrific injury to an enemy. In World War one the German soldiers had saw back bayonets and anyone found with one were given a good work over if taken prisoner. No one could survive a thrust with such a weapon. This particular example is in great condition with its proper black leather scabbard and brass fittings. The blade is in good condition well marked and undamaged. The blade is etched Firmin & Sons, London. The brass hilt is in good condition and firm. A great example of a specialist weapon/tool, used by Canadian Militia as well.